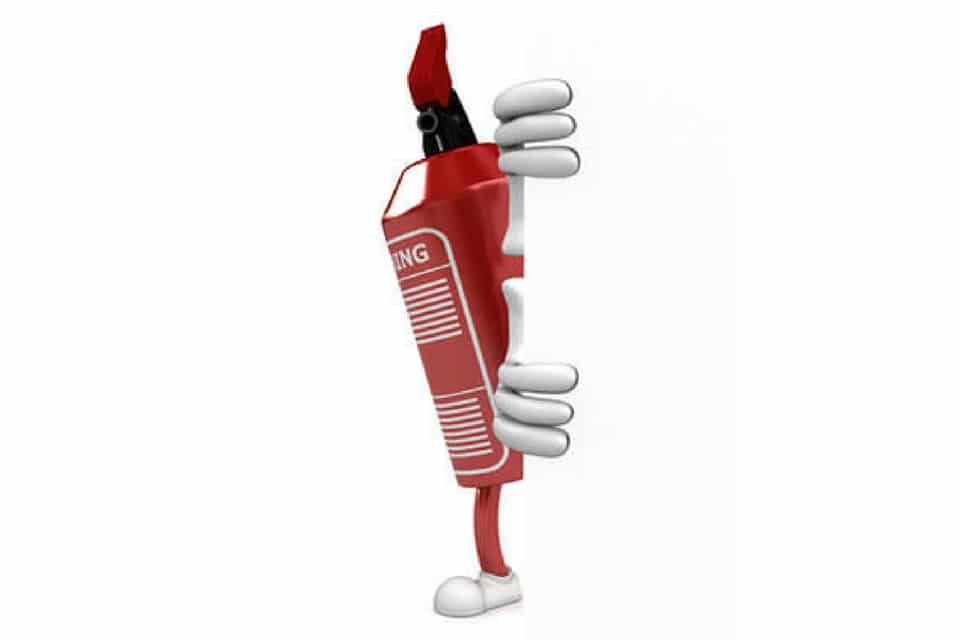 There are 5 main types of fire extinguishers, although not commonly known, they will appear in everyday life and are distinguishable by their colour coding across their stripped bands. Fires must be fought with these variations as each one is designed to combat a fire involving different materials.

These fire extinguishers are determined by a two striped white band across the surface, they will be solid red and have WATER wrote across them in a white text. These extinguishers are used for solid material fires. This includes materials such as wood, paper, cloth, coal and plastics. They should not be used on electrical appliances or burning fat. They work by high pressure water being dispensed in order to fight fire.

Identified by their cream stripe with the word FOAM printed not them, these extinguishers are designed to combat fires that are solid or liquid form. They are able to do this as they contain a foaming agent within the water based extinguisher that has a covering blanket effect on the flames and prevents them from growing and igniting any greater. when in use for liquids, the foam should be sprayed nearby and then built onto the fire for the most effective use, however on solids it can be applied straight to the area in need. These should not be used to fight electrical, fat or chip pan fires.

A black stripe with the words of C02 wrote on it is a carbon dioxide based fire extinguisher. The CO2 contained here helps to extinguish the fire by displacing the oxygen in the air. These should not be used on deep fat fryers as the fire may reignite in other areas if fat moves out of the fryer. It is most commonly used in areas with a lot of electricals as they are designed to combat this type specifically. These extinguishers are designed with frost free horns in order to prevent it freezing during its usage.

Identifiable by its yellow stripe, an extendable applicator and the words WET CHEMICAL printed across it, these extinguishers are ideal for putting out fat and cooking fires. They are designed for extremely hot fires as the chemicals released cools the oil and creates a layer preventing the fire from igniting again. They are not ideal for liquid fires. In order to use them they should be released in slow motions and empty the whole contents in the can.

Determined by their blue stripe and white text stating POWDER, these fire extinguishers are designed to combat fires that involve all solid, liquid and gases. as they are powder based, it works by creating a thermal blast that in turn cools the flames in order to combat the fire. They also can be used to put to an electrical fire, however not as well as it would work on others as it could reignite due as it may not be able to access all areas of an electrical fire (though wires). This type should never be used on fat or chip pan fires.

Finally, if you are interested in any of our services, please get in touch, you will find all our details on the contact us page.